The initiative began with conduction of a public lecture for students in 2014 entitled Spatial Thinking in Earth Sciences held at National High School of Mathematics and Sciences. As a result of the successful lecture and the interest shown by the students, a course in the field of geoinformation technologies was organized. Since the beginning of 2014/2015 school year, three courses have been conducted for the students from the National High School of Mathematics and Sciences entitled “Introduction to Geographic Information System” with lecturers Assoc. Prof. Dr. Vanya Stamenova and Assist. 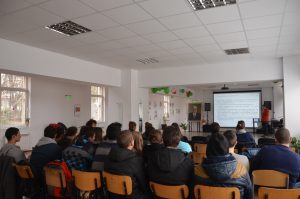 Prof. Dr. Stefan Stamenov. The developed course is intended for students interested in geographic information systems (GIS) from secondary schools (8-12 grade), who have no preliminarily preparation, i.e. level beginners. It aims to introduce students with the basics and concepts of Earth Observation, satellite imagery, spatial data, and geographic information systems and to acquire basic knowledge and practical skills to work with the ArcGIS and open source software products.

In the beginning of 2016 the initiative, proposed by Assist. Prof. Dr. Stefan Stamenov and Assoc. Prof. Dr. Vanya Stamenova expanded in thematic scope and the name “Space School” was given to it. The educational initiative Space School is organized and held by the Space Research and Technology Institute—Bulgarian Academy of Sciences (SRTI-BAS), Society for Conservation GIS (SCGIS) Chapter Bulgaria and Bulgarian Astronautical Society. It aims to introduce to the students the novelties and achievements in the field of aerospace science, Earth observation and geomatics. This is accomplished through free public lectures on the following topics:

In October 2016, the Third European SCGIS (Society for Conservation GIS) conference “Geoinformation technologies to protect the natural and cultural heritage” was organized and held in city of Sofia, Bulgaria. Conference opening took place on 11th of October at the Great Hall of the Bulgarian Academy of Sciences, followed by the plenary and technical sessions. It was attended by scientists and specialists from different institutes and universities in Bulgaria and abroad, students from Faculty of Geology and Geography of the Sofia University “St. Kliment Ohridski “and pupils from the First English Language School, 19 High School” Elin Pelin “and National High School of Mathematics and Science “Acad. Chakalov.”

During the plenary session, the students had the opportunity to learn about the activities of a number of national and international organizations such as the Society for Conservation GIS, Space Research and Technology Institute at the Bulgarian Academy of Sciences, Geographical Institute of the Slovenian Academy of Sciences and Arts, ESRI Bulgaria and the European Association of Remote Sensing Laboratories (EARSeL), European Association of Geographers (EUROGEO) and professional social network GEONET.

During the plenary session the “Space School” Initiative of the Space Research and Technology Institute, SCGIS Chapter Bulgaria and Bulgarian Astronautic Society, aimed to promote the sciences related to space and Earth observation and modern achievements in the field of aerospace research and technologies among pupils and students was presented. The technical session, prepared by ESRI Bulgaria, presents the novelties in the software product ArcGIS 10.4, techniques and tools for spatial analysis of natural and cultural heritage using the capabilities of geographic information systems.