On November 14th, 2018, Bulgaria celebrated the International Day of the Geographic Information System (GIS) at Sofia Hotel Balkan. The event is organized by ESRI Bulgaria, the leading company in the field of GIS in Bulgaria, and was held under the motto “20 years we design the world together” in front of a record number of participants – nearly 700 representatives from over 150 organizations. It was held in two parts – a seminar part where the best Bulgaria GIS projects from the last year were presented, and an official ceremony where the prizes for “Special achievements in GIS” were awarded.

The event were opened by Rossen Zhelyazkov, Minister of Transport, Information Technology and Communications of the Republic of Bulgaria. The official opening of the forum was attended by the US Ambassador to Bulgaria Erik Rubin, Atanaska Nikolova – Deputy Minister of Environment and Water, Evgenia Karadjova – Manager of ESRI Bulgaria – the leading company in the field of GIS in Bulgaria and official organizer of the Forum, Colonel Ivan Inkovski, Head of Military Geographic Service, and Prof. Nikolay Vitanov – Deputy Rector of Sofia University “St. Kl. Ohridski “

On November 14 in Sofia hotel Balkan were officially announced the winners of the national map contest “Rediscover Bulgaria with GIS”. The contest is organized by ESRI Bulgaria in partnership with the Ministry of Education and Science of Bulgaria, the Ministry of Tourism of Bulgaria, the Ministry of Culture and National of Bulgaria and National Geographic Bulgaria on the occasion of the 20th anniversary of the GIS Day in Bulgaria. Within a month, dozens of organizations and individual participants prepared printed and interactive maps with GIS technologies which were presented at the conference “20 Years We Design the World Together”. At an official ceremony, Colonel Ivan Inkovski, President of the Military Geographic Service in Bulgaria, Assoc. Prof. Dr. Stelian Dimitrov, Department of Cartography and GIS at Sofia University “St. Kliment Ohridski “and Evgenia Karadjova, General Manager of ESRI Bulgaria – the official organizer of the World GIS Day in Bulgaria, announced the winners and gave the awards in each of the categories of the competition.

The first prize was awarded to Cartgeo Troyan and GEOPAN Burgas for the first certified Large-scale tourist map of Sozopol.

Educational Initiative “Space School” of the Space Research and Technology Institute at the Bulgarian Academy of Sciences, the Society for Conservation GIS – Chapter Bulgaria and the Bulgarian Astronautics Association with their storymap „Space School“. 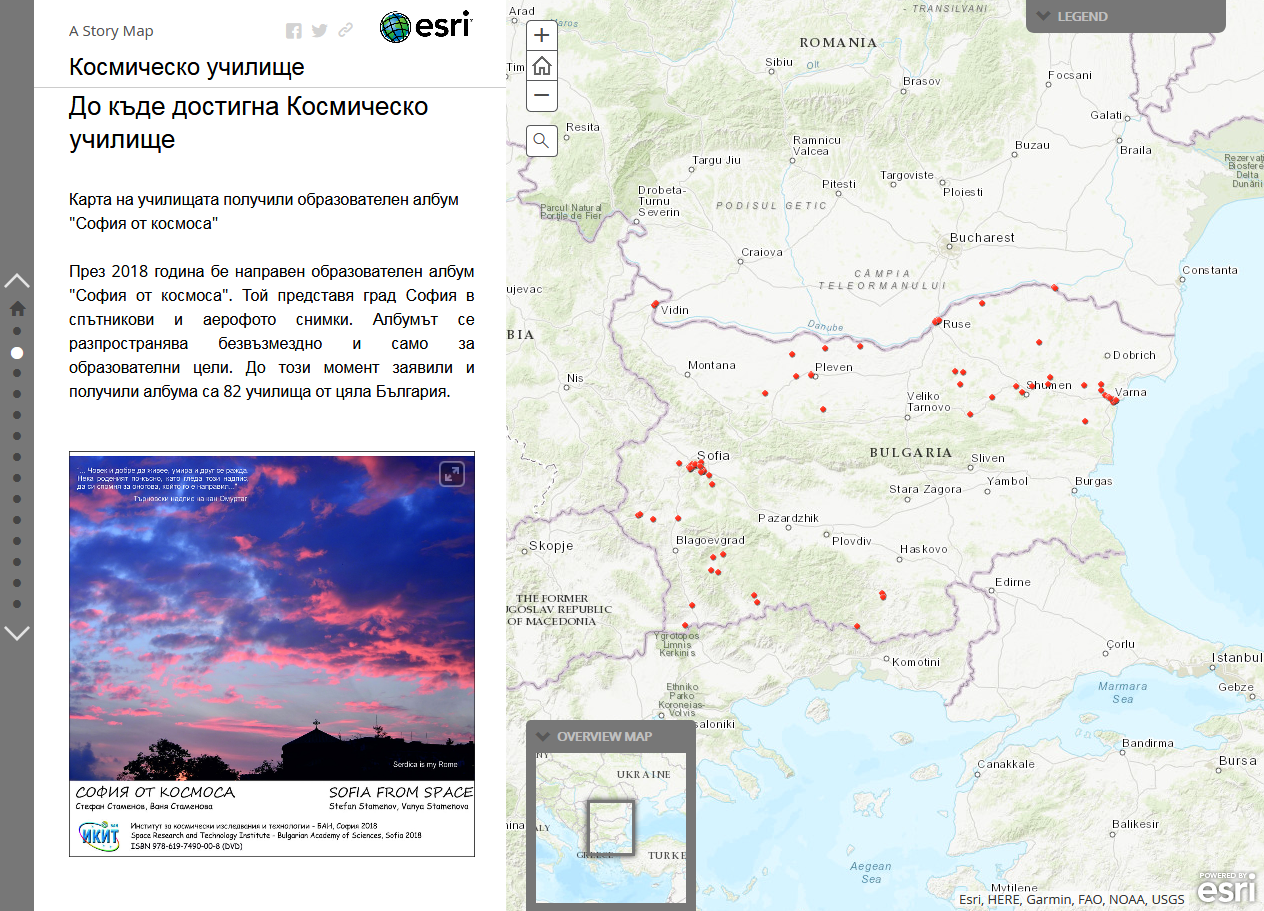 All interactive maps, participated in the competition can be viewed here. Detailed information about the event is available the website of ESRI Bulgaria тук, and about the national map competition here.